I was born in the southern Italian region of Calabria, my parents moved to Ottawa when I was a child. Coming of age in the music scenes of Ottawa, Toronto, Montreal and New York, I became active in Montreal and a member of the touring percussion ensemble REPERCUSSION. In the years since, Montreal has been my home and the world has been my office. With the support of my family, my outreach through drumming and percussion continues with performances, lessons and as both participant and producer of major musical events, in North America, Europe, South America and Asia. 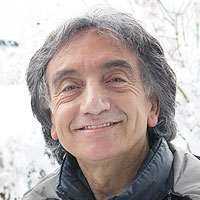